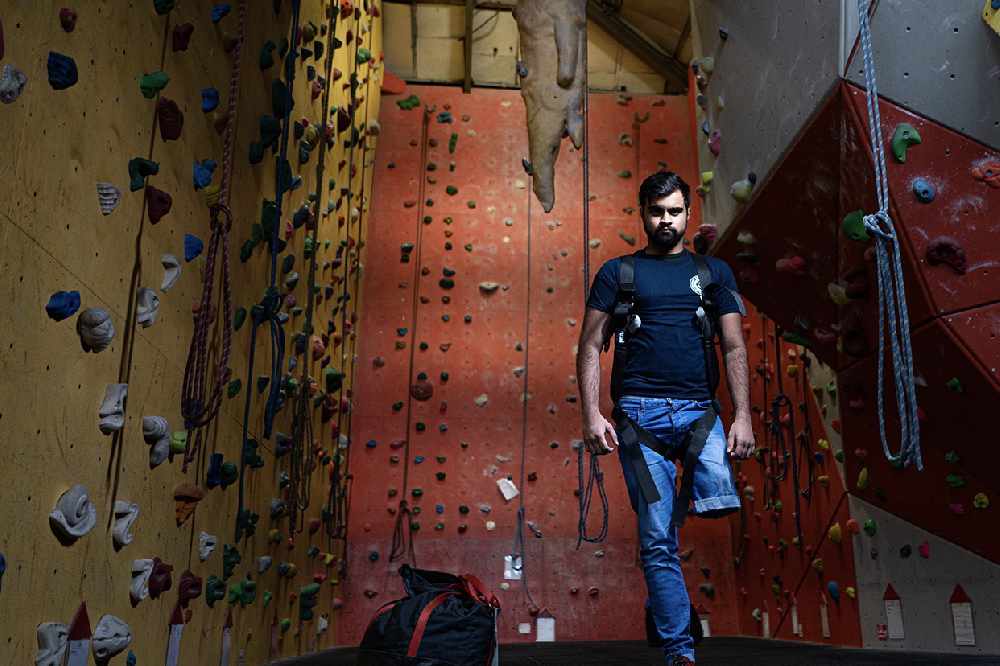 Student, Adam Islam, is inspiring his peers after taking up rock-climbing following the amputation of his left leg.

Adam started to experience medical issues with his left leg in 2018, as a result of problems with his femoral bone which he’d experienced since childhood.

Due to begin a Digital Media Technology degree at Birmingham City University in September of that year, the 19-year-old from Hodge Hill was forced to make the tough decision to defer his place for a year – as his friends went off to start their first years.

Then in March 2019 after further complications, Adam, heartbreakingly, had to have his left leg amputated.

Following surgery at the Royal Orthopaedic Hospital in Birmingham, he faced weeks of phantom limb pain and months of rehabilitation. He set himself a goal: to walk into university for his very first day in September 2019.

Adam took his rehab very seriously, exercising every single day. Finally, in June 2019, he took his first steps using a new prosthetic leg. With just two months remaining until university he started to learn the basics for walking. Everything was going amazingly to plan. Then, a small pain started to get worse, eventually reaching the point where it became too painful for Adam to walk using his prosthetic leg.

In a further setback, after getting checked and speaking to specialists, he was told he needed further surgery if he ever wanted to walk again.

Following a few weeks of consideration, and driven by a desire to ‘stop recovering and start living’, he came to terms with his situation and made the very hard decision to make the journey for his first day - in a wheelchair. He said:

“When I finally joined, I was extremely anxious and nervous. I was scared that people would judge me and stare. In the end, I hadn’t needed to worry as staff and students were absolutely amazing from the moment I arrived at the university.

“Do people stare? Yes they do, but they also smile and make you feel welcome. I don’t feel like the odd one out - I feel like I’m part of a massive family that includes all types of different people from different races and religions, speaking different languages and with different stories and abilities.

”The provision for wheelchair users is also better than I could have ever imagined, they took away all my anxiety.”

Within weeks, buoyed by a new sense of confidence brought on by the positive experience from starting his degree course, Adam approached the Rock Climbing Society at the Students’ Union about joining. He added:

“My family were a little worried when they found out, they thought it was very dangerous. But I needed a challenge, I needed to prove to myself that even with one leg I could still accomplish anything.

“Being a member of the BCU Rock Climbing Society has really helped with that. I have now been climbing and learning amazing techniques at Redpoint Climbing Centre for almost four months. The friends I’ve made at the society are amazing and have helped me with adapting myself to climb using one leg.

“It’s been an incredible experience and definitely my most proud accomplishment in a very long time.”

Adam’s confidence has increased so much that he has been hired as a member of Birmingham City University’s vlogging team. In this role he will conceive, create and direct films on life as a student in Birmingham for internal and external audiences of around 200,000 as well as representing the organisation at a wide variety of events.

This real-life career experience will be invaluable for Adam’s Digital Media technology course, which explore the fundamentals of technology in film, from narrative, composition and film theory to camera testing, designing digital production workflows and post-production.

Like the film industry itself, BSc Film Production Technology courses enable students to exercise a broad range of technical and creative skills with the support of the University’s cutting edge facilities and software, including the acclaimed Parkside Media Centre

After university, Adam hopes to eventually take up a career working in media, focussing on graphic design and film, using his new found confidence, experience and skills to move forward. He said:

“I generally feel a lot more positive about myself and my situation now. I don’t see myself having any disadvantages compared to anyone else because I’m in a wheelchair with surgery coming up, it all comes down to dedication and motivation.

”Being different in today’s world is hard. I have had to make some difficult decisions in my life. I dreamed of new heights, of expressing myself and talking about my journey. It seemed impossible. BCU helped me find my confidence. They gave me a new lease of life. Now I get to direct my own story.”