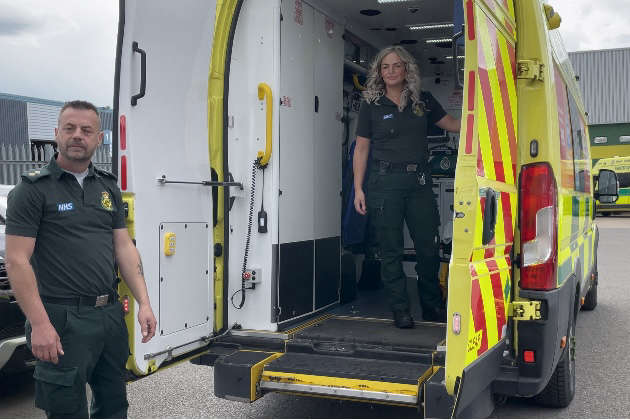 A 52-year-old man has been sentenced to nine years in prison after stabbing two on-duty paramedics last year.

Martyn Smith pleaded guilty to two counts of wounding with intent to cause grievous bodily harm to the pair after they were called out to his home in Wolverhampton last summer.

Shocking police bodycam footage shows the moment Mick Hipgrave and Deena Evans were attacked by Smith with two large kitchen knives as they carried out a welfare check in Stephens Close, on 6th July 2020.

Deena suffered a punctured lung in the attack and subsequently spent three days in hospital following surgery. Mick was stabbed in the back and was discharged from hospital the same day. The pair spent months off work for both their physical and mental recovery. However, the mental scars are still very much there.

The whole incident lasted about 12 seconds, from the moment Mick and Deena entered the property, to Smith being tasered. However, the devastating impact of those 12 seconds will stay with the paramedics forever.

Upon sentencing, Deena read out an extremely emotive victim impact statement directed at her attacker, some of which can be heard below.

“For two paramedics to be stabbed so horrifically whilst simply trying to help a patient is sickening. I want to commend the outstanding resilience of both Mick and Deena in their wishes to come back to work and continue to help their patients after everything they’ve been through.

“I admire their bravery in openly discussing the attack in order to raise awareness of the dangers paramedics and other front line emergency service workers face on a daily basis. Assaults on ambulance staff, whether it be physical or verbal, are not okay.

“I hope today’s sentence acts as a deterrent and sends a strong message that attacks on emergency service workers will not be tolerated. I want to also place my thanks on record to the crews who attended Mick and Deena and had the heart-breaking job of saving their lives.

“My gratitude also goes to the police officers at the scene. If it weren’t for their quick interventions on the day, the result could have been even worse.”

“For two paramedics to attend a job and come away with extremely serious injuries, both physically and mentally, is not okay. This is not part of the job. Over the last year 1,162 physical attacks were record on WMAS staff.

“Over the last five years physical attacks against our staff have risen by more than 60% while verbal assaults have more than doubled. That’s why we are rolling out body cameras for all frontline emergency crews.

“They will allow staff to record incidents where they feel at risk, with any recording being able to be given in evidence should an actual assault occur.”

West Midlands Ambulance Service is to rollout body cameras for all frontline emergency staff after more than 1,110 were assaulted last year. Physical attacks have risen by over 60% over the last five years, whilst verbal assaults have more than doubled.

Funding of almost a million pounds from NHS England has allowed the Trust to purchase 1,288 cameras which will be sufficient for each frontline ambulance crew member to wear one.