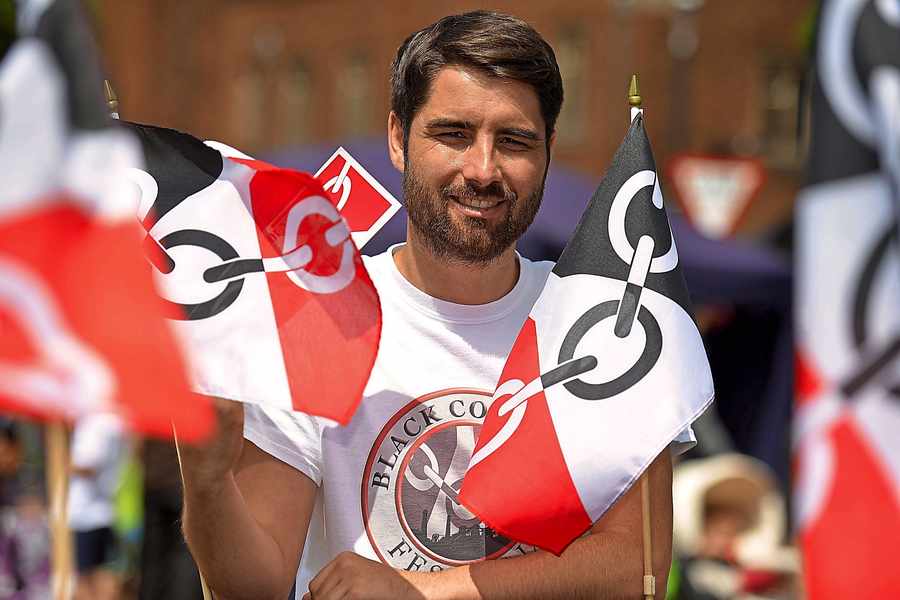 Fire stations across the region were instructed not to fly the Black Country flag on Black Country Day, after service chiefs said there could be a 'link to slavery'.

In an email leaked to the Express & Star, staff were told there was an indefinite ban on the flags use until bosses had a 'clear meaning of the chains' depicted on them.

The decision has outraged local residents and MPs, as well as the committee behind the Black Country Festival, who have called for an apology from West Midlands Fire Service who, they claim, have ‘politicised the flag’. The email, sent on Monday, read:

"It's 'Black Country Day' tomorrow. I'm not sure if any of your stations have asked permission to fly the Black Country flag - but if so the answer is no.

"There may be a link to the chains on the flag and slavery so until we have a clear understanding of the meaning of the chains we have been asked not to fly the flag."

Phil Loach, Chief Fire Officer at West Midlands Fire Service, said the service was 'continuing to consider the information available' about the flag and that staff had been encouraged to celebrate the day in alternative ways. He added:

“We’re proud of being an inclusive fire and rescue service, with staff from all walks of life who serve many diverse communities across the West Midlands. Many of my colleagues hail from the Black Country and, I know, are immensely proud to have been born, raised and to have families here.

“Having been made aware of claims about the flag’s imagery and the potential link to slavery, we asked our staff to celebrate Black Country Day in alternative ways on this occasion, so we could gain a fully rounded view.

“West Midlands Fire Service is absolutely clear on its position of supporting the campaign prompted by Black Lives Matter - which resonates directly and personally with a growing number of our staff - and is continuing to consider the information available about the flag.”

"The region was the birthplace of the Industrial Revolution and its landscape was dominated with coal mines, iron foundries, glass factories, brick works and many small industries for as far as the eye could see.

The flag was designed by Gracie Sheppard, from Stourbridge, who entered a competition run by the Black Country Museum when she was 12-years-old. In 2015 it became the second highest selling flag in the UK after the St George flag. It features a white glass cone flanked by black and red panels, inspired by Elihu Burritt’s famous description of the area as being 'black by day and red by night'.

Steve added: "To cause offence, intention is important. There is no intention to offend anyone with the flag and, if I'm honest, most people I speak to are not offended. But that doesn’t mean questions can not be asked of the region or the symbolism behind the Black Country flag.

"We shouldn’t blindly beat our chest in defence of both the flag or the region without knowing its history. We should all take time learn about the remarkably interesting history of our region and it should be open for discussion."

The inclusion of the chain across its centre represents the chain industry in the region, as well as the linking the different communities, but it has had its fair share of controversy in previous years.