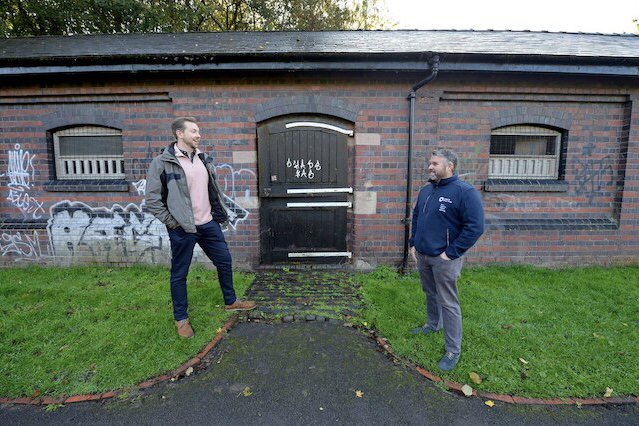 Brierley Hill campaigner, Adam Davies, has teamed up with the Canal & River Trust to propose a restoration project to retell the history of one of the Black Country’s most iconic Industrial Revolution landmarks.

The Nine Locks, sited just off Delph Road, is effortlessly recognised by its striking flight of eight locks and distinctive waterfall weirs which connect the Dudley and Stourbridge Canals.

The repurposed building would mainly be used as a ‘welcome station’ from which passers-by could pick up leaflets and guides and chat with Canal & River Trust volunteers about the history of the local area.

Keith Stevens, Area Operations Manager for the Canal & River Trust – the charity that cares for the canals across the West Midlands – has emphasised the importance of preserving the original character of the building as a crucial part of any plans. He said:

“Not only are the stables grade II listed, but they are also in a conservation area and the locks are also listed, so it is a very sensitive heritage area.

“Nevertheless, we want to give this original waterway gem a new lease of life so it’s here for generations to enjoy”.

Depending on the conclusions of a Heritage Impact Assessment, the proposers also hope to use the most unmodified section of the building to facilitate education visits from schools and other community groups – bringing the history of the building back to life for a new generation. Adam, who approached the Canal and River Trust earlier in the year, said:

“Like so many local people, I have enjoyed countless walks along this stretch of canal and have had conversations with visitors from far and wide about its history.

But too often those visitors understandably comment that the site’s past isn’t illustrated as obviously as it could be.

“That’s why I approached the Canal & River Trust to exchange ideas on making better use of the site, and to see if I might be able to help make those ideas a reality.

“It turned out that Keith and his team of volunteers had long considered using the building as a welcome station, so we built on that idea and began to scout for local support. The response has been phenomenal – people really want to see this happen.”

As well as locating historical information at the repurposedstable block, the team are also hoping to raise funds to replace and update the information boards which were installed beside the locks in the 1980s but have since been ruined by graffiti.

The viability of basing a cycle hire scheme at the location is also being discussed. The Canal & River Trust highlight that research shows that being by water makes us happier and heathier.

The early-stage proposals have been presented to the Brierley Hill Community Forum where plans were warmly received by stakeholders and local residents, and potential funding leads were considered.

Anyone who thinks they may be able to contribute to the project, perhaps by sharing old photographs of the site, is encouraged to email them to Adam at adam.brierleyhill@gmail.com