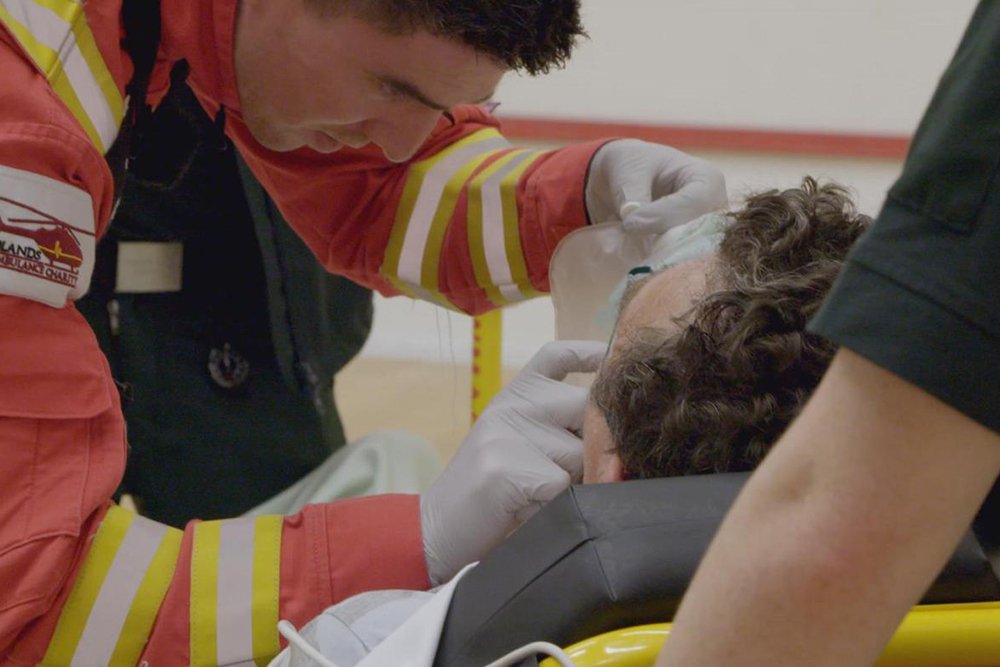 The family of Aidan Brown have thanked a critical care paramedic for saving his life after he went into cardiac arrest - an event captured by a film crew shooting a new Channel 5 documentary.

On 16th January this year, John suffered a cardiac arrest while playing squash with his friend of 40 years, Clive Fletcher.

Fortunately, Clive new how to do CPR and immediately started helping his friend until the staff at the Bert Williams Leisure Centre in Bilston took over and used the defibrillator they have at the centre on John.

Two ambulance crews, a paramedic officer and Aidan on the Midlands Air Ambulance Critical Care Car were all sent to the scene. The incident was shown on Episode two of the programme which went out on Monday evening.

Off the back of the programme, John’s daughter Georgia posted a picture on her Instagram account of her and John along with his son Chris and wife Di, thanking everyone for saving her Dad’s life. She said:

“Thank God he was somewhere that had access to a defib otherwise it could’ve been a completely different story. We are so grateful that he is here to tell the tale.  The chances of survival for an out of hospital cardiac arrest is less than 1 in 10 so he is so so lucky.

“A massive thank you to Clive, the leisure centre staff, the team from WMAS and Midlands Air Ambulance along with the staff at New Cross Hospital for looking after him through his surgery, where he had four stents fitted!

“When we watched the programme it was hard viewing but it was a lovely touch to see CCP Aidan thank the leisure centre staff as they took Dad to the ambulance. Really lovely.”

“For every minute after a cardiac arrest where no-one is doing CPR, the person’s chance of survival drops by 10%!  It is therefore absolutely vital that someone starts CPR as soon as possible.

“Equally, having the defib close at hand will make a massive difference too.  It’s one of the reasons we want to see numbers of publicly accessible defibs rise as much as possible.

“John is now getting to spend time with his family because some started CPR quickly and a defib was close at hand.  Think how many more lives could be saved if everyone knew CPR and there were many more publicly accessible defibs around our villages, towns and cities.”