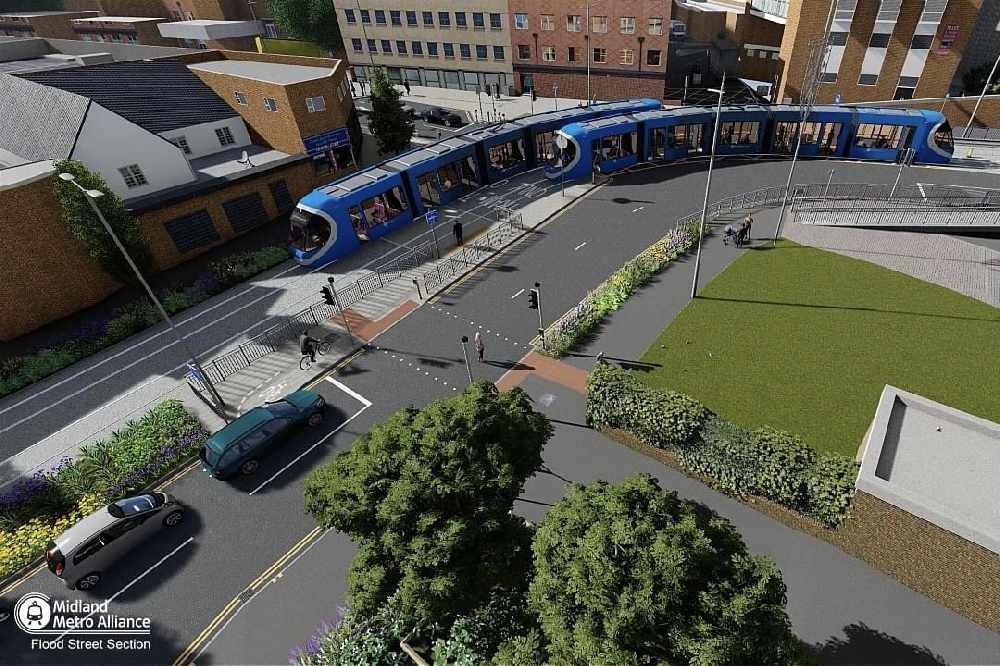 A computer-generated fly-through released this week gives a glimpse into the future showing how the much-anticipated Wednesbury to Brierley Hill Metro extension is set to look in Dudley town centre.

The footage, created by designers at Midland Metro Alliance, who are planning and constructing the route on behalf of Transport for West Midlands, shows West Midland Metro’s blue trams travelling in both directions along Flood Street transporting virtual passengers to Wolverhampton and Brierley Hill.

The short video shows how tram stops are likely to look and how the Metro route will interact with vehicle and pedestrian traffic in the Black Country town. Mayor of the West Midlands, Andy Street, said:

“This brilliant video clip transports viewers a few years into the future to see an important addition to our region’s transport network. The construction of this extension is more important than ever as infrastructure projects, like this one, are critical to our recovery from the global pandemic as they help to generate money for the local economy and secure and create local jobs for local people.

"The Wednesbury to Brierley Hill route will be a huge connectivity boost for the people of Dudley and Sandwell, and it also forms a key part of our wider, ambitious plans for the metro network across the whole West Midlands.”

The Wednesbury to Brierley Hill Metro extension will boost public transport in the Black Country, providing much-needed links to the existing heavy and light rail networks, and helping connect people to education, training and career opportunities further afield in the West Midlands.

The 11km extension will also play its part in helping to regenerate the Sandwell, Dudley and Brierley Hill areas, making it more attractive to investors and providing easy access to the region’s many and varied attractions via public transport, including Dudley’s Black Country Living Museum, Castle and Zoological Gardens and Canal and Tunnel Trust. Councillor Ian Kettle, Dudley Council Cabinet Member for Regeneration and Enterprise, added:

“The Metro is just one part of the huge programme of regeneration taking place across the town but it is a massively important one as it will help those living in the borough be in easy reach of employment, training and education opportunities across the entire West Midlands by fast and frequent public transport.”

Work on the Metro route has continued at pace throughout the global pandemic with much of 2020’s activities involving the upgrade and diversion of utilities in Dudley and the demolition of aged structures in Sandwell, along with clearing the site of the disused South Staffordshire Railway which will make up more than seven kilometres of the tramway. Tracks and sleepers removed from the railway corridor were donated to Severn Valley Railway in Bridgnorth earlier in the autumn as part of the Midland Metro Alliance’s sustainability initiative.

Next year work will continue on structures in Sandwell, with the first new bridge decks set to be installed for the extension in the spring, and full construction expected to begin in the first half of the year along Castle Hill in Dudley.

More detailed information on construction schedules, including traffic changes, are currently being finalised and further details will follow in early 2021. You can find out more about the Metro works, including regular updates on progress, by visiting metroalliance.co.uk.