History repeats itself as historic fountain is presented with new award 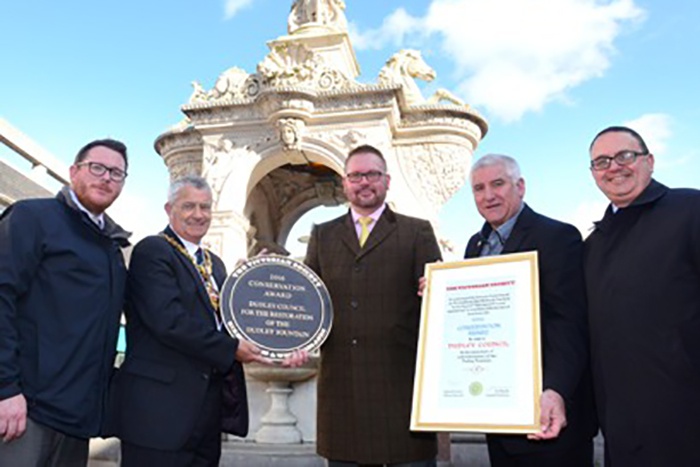 A presentation ceremony at Dudley Fountain was held exactly 150 years to the minute that the iconic fountain was first unveiled.

The recently restored Dudley Fountain was awarded the Victorian Society’s Birmingham & West Midlands Conservation Award in 2016 for the sensitive and skilled restoration of the Grade II* listed fountain.

The group selected noon on 17 October 2017 as the exact time to present the award to the Mayor of Dudley, as it was at this time and on this date 150 years ago that the original fountain was presented to the town by the Earl of Dudley.

Thousands turned out to the original unveiling, with people crowding onto the streets and some even standing on the roofs of buildings to get a better view. Mounted soldiers on horseback complete with plumed helmets surrounded the fountain.

The countess of Dudley unveiled the fountain and then sipped a glass of water drawn from it to acknowledge the importance of municipal provision of clean drinking water for all. The fountain features small basins for people and water bowls and drinking troughs which were designed to provide water for dogs, cattle and horses.

The fountain was designed by sculptor James Forsyth, who also designed the Perseus and Andromeda fountain at Witley Court and the Flora Fountain in Mumbai. It features ornate dolphins and flowers, as well as representations of mining, agriculture, commerce and industry, important sources of wealth in the Victorian era.

It fell into disuse in the 20th century and the troughs were filled with soil and planted with flowers.  Dudley Council brought the fountain back into use in 2015 thanks to funding from £4.6m HLF European funding which was also used to revitalise the market place through the provision of new paving, market stalls, new public toilets, street furniture, street lighting and public art.

The fountain not only benefited from sensitive cleaning and restoration, but the unseen engineering elements were restored. New paving was laid down and a poem by local poet John Edgar was laid in the stones around the base. Mayor of Dudley, Councillor Dave Tyler said:

“We were delighted to receive the award in 2016, and think that the idea to formally present it to the town 150 years to the day of the fountain’s initial unveiling is a wonderful one. The Victorian Society does such an important job in promoting and preserving our shared architectural heritage across the country and it’s an honour to be chosen.

“I look forward to receiving the award, on behalf of the town and appreciate the recognition this represents for our wider work in restoring and revitalising our wonderful town centre.”

“We continue to invest in the town centre which has already benefited from the complete restoration of the market place, new street furniture and award-winning lighting and the sensitive restoration of historic buildings to bring them back into business use amongst others.

“We are proud of Dudley’s past as the historic capital of the Black Country and continue to see a positive future for the town and a borough as a whole, with a range of ambitious projects including the new management team at Dudley Markets and the ambitious DY5 Enterprise Zone.”

“Dudley’s fountain was hailed as one of the country’s finest fountains when it was unveiled 150 years ago and to this day it a remains a wonderful Victorian masterpiece.  Its 150th anniversary marks a special moment in its history and thanks to the recent restoration work, it remains one of the town’s most iconic features and I hope it remains that for many years to come.”

The prize of an illuminated scroll and 18” commemorative bronze disc will be made to the Mayor of Dudley by Stephen Hartland, Chairman of the Victorian Society Birmingham and West Midlands Group. The Regional Conservation Award was established in 2015 to reward the high quality conservation work done by architects and groups across Birmingham and the West Midlands.