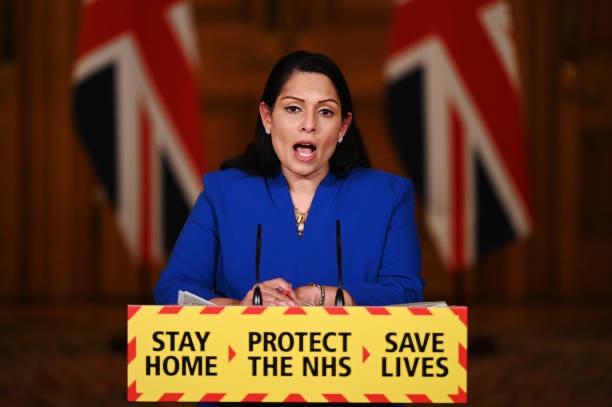 During an interview on ITV's This Morning, Priti Patel indicated that people should 'exercise alone' - despite government guidelines permitting socially distanced activity with up to one other person.

During an interview with hosts Philip Schofield and Holly Willoughby, Ms Patel was asked whether she felt clarity on lockdown regulations was leading to confusion and anger amongst the general public.

The debate was sparked when the Prime Minister was photographed exercising seven mile's away from his Downing Street home in East London's Olympic Park, at the same time as two women in Derbyshire were fined £200 for walking in an empty park the same distance away from their own homes.

In response, Ms Patel pointed out that "London boroughs are big places in terms of cycling and walking". But when it was pointed out Mr Johnson went out of Westminster, Ms Patel added:

“London is a big geography in terms of cycling – five miles, ten miles – many people cycle big distances and that’s normal to them. The clarity is exercising on your own and not socialising.

“The point to make about any exercise is it should be local, people exercise differently. But exercise on your own and don’t use it for a social meeting.”

However the guidance produced by the government says people can exercise outdoors, both on their own and with their household or support bubble or with one person from another household as long as social distancing is maintained.

The faux pas has caused uproar on social media, where many users suggest that not only do lockdown regulations permit exercise with at least one other person, it's also an important boost for the mental health of the country as well as being a vital safety net for those who don't feel safe exercising alone. One commentator said:

"It's absolutely true that the fewer people you mix with,the less likely you are to spread the disease and if you feel safe and comfortable exercising alone, then that's great.

"But for millions of people around the country, someone in the position of Home Secretary suggesting that you should only exercise alone could, at best, stop them leaving the house.

"It's also incredibly unhelpful for one of the most senior cabinet members to give advice that is the polar opposite of the rules she and her colleagues played a part in writing. It continues to push an 'us and them' mentality which is not helpful for instilling confidence."

It is the second time this week that Ms Patel appears to have got the rules wrong. Hosting a Downing Street press conference, she stated that outdoor recreation is 'permitted in a restricted and limited way'. However the same lockdown rules she fell foul of today expressly prohibit socialising during the lockdown.

Downing Street aides said she misspoke and meant to say 'exercise' rather than recreation.