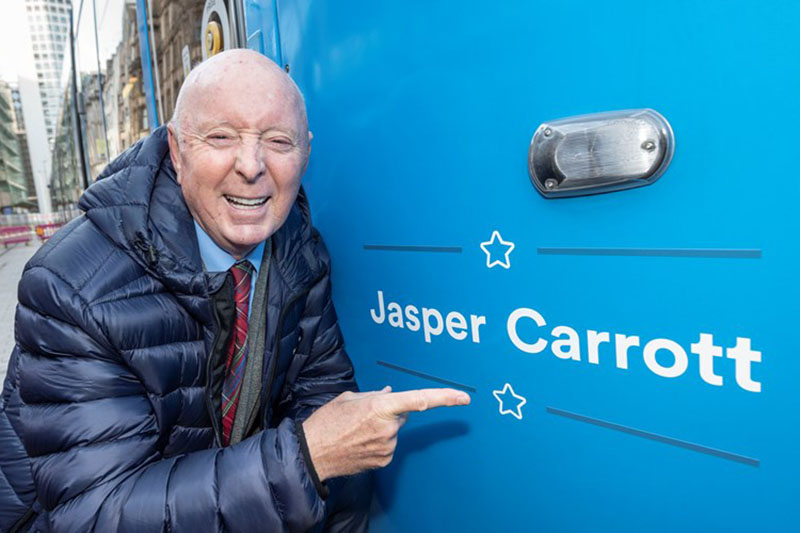 Brummie comedy legend Jasper Carrott has today unveiled a tram named in his honour in a special ceremony.

It was the first time he had taken a Birmingham tram ride in 70 years and he joked that he particularly enjoyed the experience as he didn’t have to pay.

Joined by his wife Hazel, he arrived by tram at the new Metro stop outside Birmingham Town Hall. The new tram stop is on the West Midlands Metro extension from Grand Central to Centenary Square which is due to open to passengers next month. Jasper said:

“Having a tram named after you is indeed an honour, especially when it is all tied up with Birmingham and the West Midlands where I was born and bred.

"Today was pretty special. The last time I rode on a tram in Birmingham was over 70 years ago when I went from the city centre to Handsworth Wood, it took about four days.

“To ride on the super smooth flying machine was a real treat especially as I didn't have to pay.”

He is the latest celebrity to have a tram named after them following rocker Ozzy Osborne and the late Cyrille Regis, in recognition of his ground breaking work both on and off the football field. Laura Shoaf, managing director of Transport for West Midlands, said:

“With his entertainment career spanning 50 years Jasper Carrott has been a champion for Birmingham and a great ambassador for the West Midlands and is fully deserving of this honour.

“In a few weeks his tram will be taking passengers to Centenary Square to enjoy the big wheel and ice rink and in a few years we are planning to run another line to the NEC and Airport, which would carry the Jasper Carrott tram to his beloved Birmingham City FC.”

The line to Centenary Square is the first phase of the Westside extension to Edgbaston, with phase two, taking trams along Broad Street to Five Ways, to be completed by the end of 2021.

Work is also under way on extensions in Wolverhampton City Centre, due to open next year, and from Wednesbury to Brierley Hill in the Black Country.

Plans are also being developed for the Birmingham Eastside line through Digbeth, continuing with a further extension to the NEC, Airport and HS2 Interchange via Bordesley Green and north Solihull.