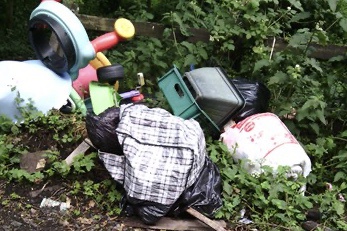 The Mayor of Dudley is leading a campaign for covert CCTV to be installed to catch out fly-tippers blighting a borough beauty spot.

Councillor David Stanley was out at 6.30am on Sunday to show council workers the hotspots where rubbish is regularly being dumped on Cotwall End Road, part of the scenic Cotwall End Nature Reserve in Lower Gornal.

The area has become a popular target for fly-tippers during lockdown – and building waste, garden waste and toys were all found dumped during the mayor’s walkthrough with the team. Councillor Stanley, the Mayor of Dudley, said:

“Cotwall End Nature Reserve is right on my doorstep and I regularly enjoy a walk around it.

“We’re very lucky to have it and it’s been very disheartening in recent months to see the amount of rubbish that has been dumped by people with no regard to others along Cotwall End Road.

“It costs the council thousands and thousands of pounds to clear up.

“I have asked officers to consider installing covert CCTV cameras around the hotspot areas. It would act as a deterrent and catch those who insist on continuing to flout the law.”

Recently a council team collected 120 tyres in one trip that had been dumped along the picturesque route, which is popular with walkers. Councillor Karen Shakespeare, cabinet member for environmental, highways and street services, added:

“Fly-tipping is totally unacceptable at any time but even more so at the moment, when the council has to prioritise doing all it can to keep essential services running and support the most vulnerable people in society.

“Our staff will investigate every single incident reported to us. Anyone found to be responsible for fly-tipping could be liable for fines of up to £50,000 through the courts.

“We do not want our beauty spots to become dumping grounds - anyone who is caught will feel the full force of the law.”