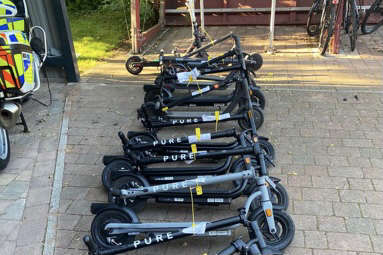 Police have seized well over 100 e-scooters as part of ongoing work to tackle illegal riders across the West Midlands.

Officers took action in response to public concerns around users breaking the law and putting others at risk.

Between January and June 106 e-scooters were taken off the streets, while an operation in Birmingham city centre on Monday saw a further 14 seized.

E-scooters are legally available to buy but it’s currently against the law to ride a privately owned one in any public place - including roads, parks or pavements - in the UK.

The only place a privately owned e-scooter can be used is on private land, with the land-owners’ permission.

VOI e-scooters being trialled in Birmingham, Coventry and Sandwell are legal but only to ride in places where people can ride bicycles such as roads and cycle lanes. They cannot be ridden on pavements. Sergeant Jon Butler, from the road harm prevention team, said:

"The scheme being trialled has ensured there is an alternative and more environmentally-friendly way to travel.

"However, e-scooters can be very dangerous if people use them illegally and dangerously. We want people to feel safe in our towns and cities and we'll continue to take action against those who ignore the rules."

"I’m concerned the government has got itself in a mess with e-scooters. There doesn’t seem to be a consistent, clear message for people to follow.

"I’m also concerned some retailers are turning a blind eye to the law and are selling expensive e-scooters without warning customers they can’t ride them on public roads.

"I’d urge anyone who rents an e-scooter, as part of the trials taking place in our region, to do so safely, wearing a helmet and sticking to the roads and cycle lanes. Anyone who buys a private e-scooter should only ride it on private land with the owner’s permission.

"I’m grateful to West Midlands Police for taking tough action and for engaging with those riding them and educating them on the rules.

"I fully support looking at greener ways to travel around our towns and cities, but the government must ensure safety isn’t compromised."

For more information about the trial and legal use of e-scooters visit gov.uk and voiscooters.com.