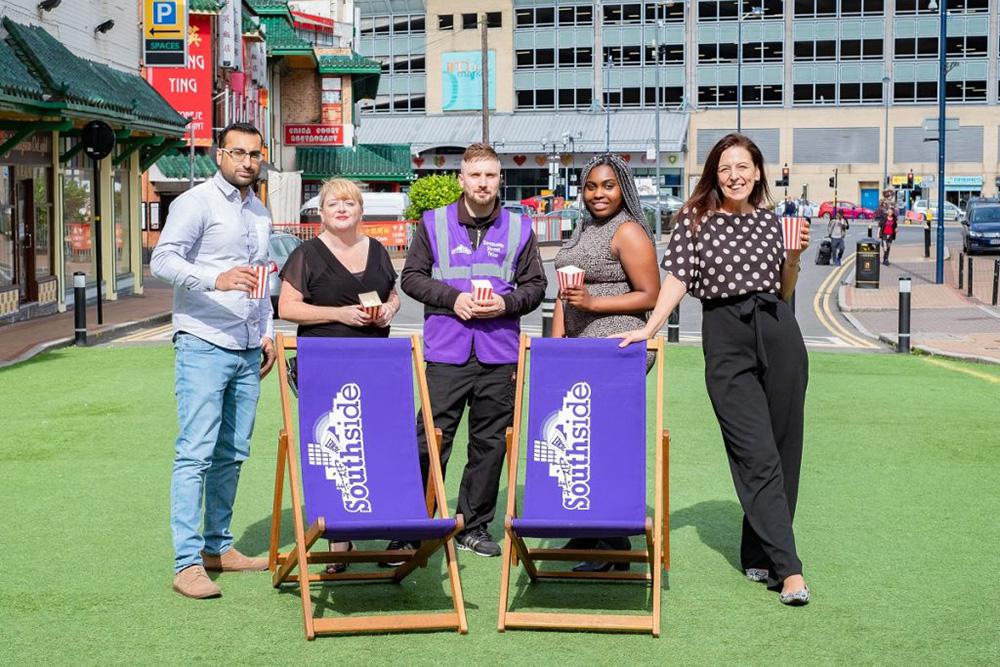 A new free-to-attend outdoor cinema is set to arrive in Birmingham’s Southside in time for August bank holiday, with a schedule of classic blockbuster films for all the family.

The giant 16.5m sq ‘Screen on the Green’ is part of the end-of-summer transformation of Hurst Street into a picnic-friendly space complete with 120 sq metres of artificial turf and 100 deck chairs for visitors to sit back and enjoy the full film schedule in comfort.

Southside Business Improvement District has commissioned The Electric cinema to schedule an eclectic mix of family favourites and some of the biggest releases from the last 12 months. Movies include the 2019 remakes of Aladdin and Dumbo, Mary Poppins Returns, Stan and Ollie and sing-a-long classics Mamma Mia, Beauty and the Beast and Greatest Showman, along with many more.

Film screenings will take place at 3pm and 5.30pm Friday to Sunday, starting on August 23rd with The Lego Movie and ending on September 8th with Mamma Mia.

The screen will also show Dance Hub Birmingham’s community film Antarctica, which brings to life the choreographer’s visit to the South Pole and tackles the issue of climate change and the melting ice caps. Julia Robinson, Manager at Southside BID, said:

“We have got such an amazing space on Hurst Street, which is set to become Hippodrome Square in the near future. So before work begins on that redevelopment we want to show tenants and visitors the potential of the area.

"We already boast some of the best entertainment venues in the city, and Southside Cinema will help to highlight all of the exciting things happening in the district. We’re lucky to have film experts at The Electric close-by and they’ve hand-picked some excellent films, including a showing of Aladdin on the day of its DVD release.”

To see the film listings in full visit the Enjoy Southside website.