Special tribute for 100th anniversary of World War One 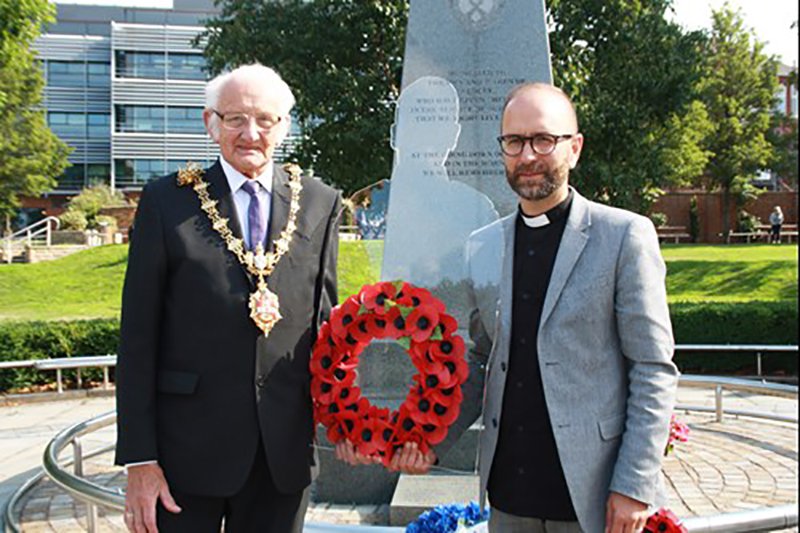 As Dudley prepares to remember those who gave their lives to war at this year’s Remembrance Sunday service, a special tribute will be made to mark the centenary of Armistice.

On empty chairs sitting amongst the veterans will be a number of silhouettes, a poignant reminder and mark of respect to those who didn’t return from the Great War of 1914 to 1918. It comes as a giant cross was again put in place next to the fountain in Dudley town centre, where residents can stick poppies in honour of the war dead.

The transparent silhouettes are part of the national ‘There but not there’ campaign and will be used at events across the country on Sunday November 11, exactly 100 years since the First World War ended. Councillor Alan Taylor, the Mayor of Dudley, said:

"On the 100th anniversary we remember those from our borough and beyond who went off to war to defend our freedom but were sadly never to return. We give thanks to the women at home who contributed to the war effort carrying out important duties in local munitions factories and we think back to those who lost loved ones in the war and how they would have felt when the clock struck the 11th hour, on the 11th day, of the 11th month.

"Each year we pay our respects to all armed forces personnel who have lost their lives in war but this year we will pay special tribute to those who gave the ultimate sacrifice 100 years ago.”

Dudley’s Remembrance service will take place at the cenotaph in Ednam Road from 10.40am with a two-minute’s silence at 11am. Beforehand, veterans will be joined by servicemen and women and community groups in a parade from Vicar Street starting at around 10.15am. It will move along High Street, Stone Street, Priory Street, Priory Road before finishing in Ednam Road by the cenotaph. Uniformed organisations will meet in Vicar Street from 10am.

Community led services will be also held in other areas of the borough, including Halesowen and Stourbridge.  People can contact their local Royal British Legion Branch for details.

For information about life in Dudley during World War One go to dudley.gov.uk and search 'Dudley Remembers'.