I first got started in radio around 1999 when I joined Stourvally Hospital Radio at Wordsley Hospital while studying media at college.

Since then over the years I was involved with RSL (restricted service licence) station Stourbridge FM and was one of the founders of what would become 102.5 The ‘Bridge, seeing it grow and develop every step of the way up to the point where it evolved into what is now Black Country Radio.

On Black Country Radio I present Glass Eye on in the early hours of Wednesday morning from midnight, a show that primarily specialises in Alternative Rock, Indie and Punk from the last twenty years through to the present day.

We also include material from other genres that fit in with the sound of the show along with lesser heard stuff such as album tracks and artists you don't generally hear anywhere else on the radio. 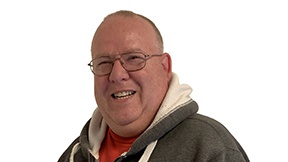